As Wildlife Recreation Branch Chief at the AZGFD Scott develops outdoor recruitment and retention activities in Arizona that support but are not limited to hunting, fishing, shooting sports, archery and wildlife viewing.

He Chairs the Steering Committee for the Hunting and Angling Heritage Workgroup. On the national level, he serves on the Western Association of Fish and Wildlife Agencies committee for Hunter, Angler, Shooting Sports and Wildlife Participation. He also applies his 25 years of leadership to support the Outdoor Industry Business Summit on both state and national levels.

Before joining the Arizona Game and Fish Department, Scott was an Infantry Officer in the U.S. Army National Guard in addition to leading award-winning regional teams for The Home Depot and Dick’s Sporting Goods.

Scott also has become part of Shot Heard ‘Round the World Day! Shot Heard Round the World Day is a light-hearted annual event held at participating ranges that provides recreational shooters a safe opportunity to celebrate the birth of a nation. At 7:30 am on April 19th, 1775, the first shot of the American Revolution was fired at Lexington Massachusetts. This annual event provides enthusiasts and patriots a safe and structured opportunity to gather socially and commemorate the first shot fired of the American Revolution.

Shot Hear Round the World Day celebratea the birth of a nation. At 7:30am on April 19th, 1775, the first shot of the American Revolution was fired at Lexington Massachusetts. 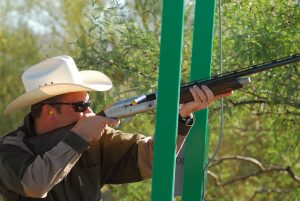