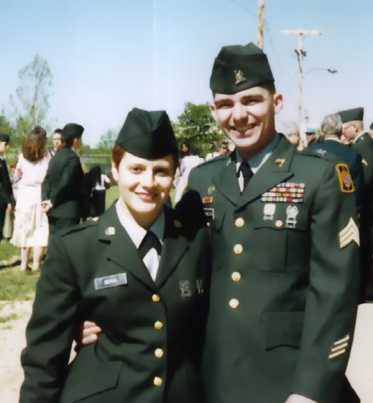 Scott & Dimi Johnson are both retired from the Army (Note the pre-retirement photo), and now are professional photographers operating both the Brands Victory Fotos and PinUp Postcards.

Scott is also the inventor of TactiCatch, which is a field-tested and approved AR Rifle Retention System.

Scott retired as a Sergeant First Class and E-7, after 23 years of service from the Army as a Military Policeman and being injured while in Iraq. Scott has held positions from team leader, squad leader, platoon sergeant and detachment first sergeant including duties as a drill sergeant for 3 years and positions on the Army’s Military Police version of SWAT teams.  Scott has been deployed to the first Gulf War in 1990, Honduras, Korea 4 times and Operation Iraqi Freedom in 2008-2009 where he was injured.  Scott’s medals are vast and honorable, including the Combat Action Badge and the Drill Instructor Badge.

Dimi served 8 years as a Combat Medic in the Army as well and left as a Sergeant. Dimi has held positions of great responsibility regarding the medical aspects and readiness of units including her last tour of duty in Korea where she was in charge of the medical screening and records for all of the 2nd Infantry Division.  Dimi has a tour of duty in Korea as well.  Dimi has many Army Commendation and Achievement medals under her belt for many achievements and accomplishments including one for bringing her unit to #1 in the Army on medical readiness!

When asked to tell us what they are doing in “retirement” the say: “We still love being around our fellow Veterans. Most notably we volunteer for an organization in Glendale called Soldiers Best Friend who helps Veterans living with PTSD and/or TBI’s by pairing them with dogs often rescued from local shelter to become certified service and therapy teams. We volunteer our photography services for them when the teams graduate and give the Veteran an image of them and their new battle buddies that will hopefully continue to bring them great joy for generations to come. Another awesome thing Dimi does with her vintage pinup photography is that a lot of her clients are spouses or girlfriends of current and former servicemen who come in and get a vintage military inspired pinup featuring them for their loved ones. Some even come in and honor their grandfather by doing the shoot for them. There are a few other Veteran related organizations that we occasionally work with as well here in the valley area.

Together they have raised three children: a 15 year old at home, a 26 year old son in Texas and a 22 year old daughter in Georgia.