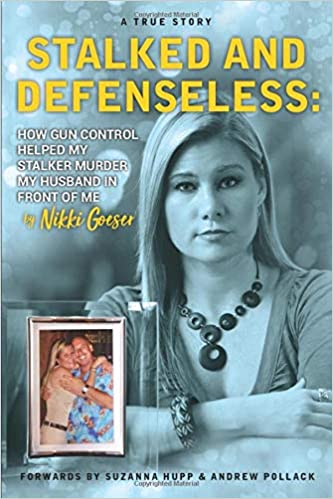 Nikki Goeser is a survivor of a deadly crime in a gun-free zone where she lost her husband at the hands of her stalker.

Nikki is the author of “Stalked and Defenseless: How Gun Control Helped My Stalker Murder My Husband in Front of Me.”

She is the 2012 recipient of the NRA’s Sybil Ludington Women’s Freedom Award for her dedication in educating the public, media and legislators on the importance of the 2nd amendment.

She works as Communications Director for the Crime Prevention Research Center (CPRC), founded by Dr. John Lott, an economist and a world recognized expert on guns and crime (author of More Guns, Less Crime.)

On March 3, 2021 Nikki offered testimony for Representative William Lamberth’s Lifetime Order of Protection Bill in front of the TN Legislature-House Civil Justice Committee. This bill is to prevent victims from being re-victimized, like Nikki Goeser. She had been married for just over 16 months, when her husband Ben was murdered in front of her by her stalker. The murderer/stalker has continuously sent Nikki twisted love letters from prison for many years. He is scheduled to be released from prison early. Nikki is fighting for a Lifetime Order of Protection Law in TN. Nikki testified in support of the legislation.

In April of 2021 Nikki offered important and deeply personal testimony at the Senate Judiciary Subcommittee Hearing on the Constitution concerning the dangers of Red Flag Laws and how they can be mis-used to re-victimize people who have suffered emotional and physical injuries at the hands of criminals and abusers.

Places you can find Nikki Goeser