Andy served ten years in the Air Force as a law enforcement specialist. In 1994, while assigned to Fairchild Air Force Base, Brown responded to the base hospital and confronted a gunman who was shooting men, women and children. Brown ended the killing spree with a seventy yard shot from his Beretta M9. 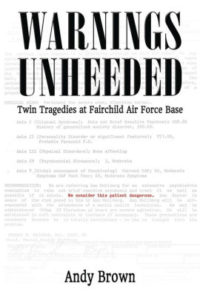 In 2016, Brown published Warnings Unheeded: Twin Tragedies at Fairchild Air Force Base. The book is part of his on-going effort to share the lessons learned from the Fairchild tragedies. Originally from Port Orchard, Washington, Brown now lives in the Spokane, Washington area where he works for the Department of Homeland Security.

Andy is a husband, father and an avid shooter and supporter of the right to bear arms. He regularly assists in training armed citizens in Active Shooter Intervention at the Firearms Academy of Seattle.

Places you can find Andy Brown, Author of Warnings Unheeded