After-Action Report on the #DCProject, by Cheryl Todd

It began with a question…What if? What if I could sit down with each legislator in our nation’s capital and help them better understand who values the Second Amendment, and why?

This is the question that 3-Gun Competitive Shooting Champion, Dianna Muller, asked herself in December of 2015. And, eight short months later, saw the answer emerge in the form of The DC Project and the DC Project Rally. 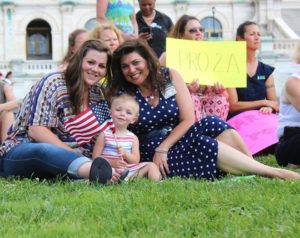 The DC project brought 50 women, one from each state, to Washington DC to establish relationships with their legislators and revealed the faces and stories firearms owners and Second Amendment supporters. The Rally took place on west lawn of the Capitol Building as a way to celebrate the new friendships that had been formed and the experiences these ladies had while on Capitol Hill. I, Cheryl Todd, the author of this article was proud to be among them, along with my daughter, Cassie Todd-Jameson, and her daughter, two-year-old Raelynn Rose Jameson; three generations being represented as we met and talked with our legislators. 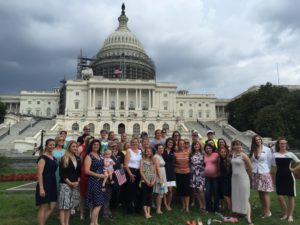 The DC Project capped off their time in Washington with a Rally on the West Lawn of the Capitol Building.

The DC Project is a true grassroots effort. Every participant came to Washington, DC on our own dime. Each woman took time off of her job, used vacation time, and spent her own money for plane, train, and automobile expenses. Each paid for her own hotel room and all of her own meals. When asked why each of us would invest so heavily in a brand new idea the answers given by each and every participant echoed that it is too important to let others continue to speak on our behalf. It is too important to allow others to interpret for us our desire to protect and preserve this vital Constitutional Right, and was summed up in Mississippi’s Skincare Studio owner Kim Condon’s comment, “The DCP opened my eyes to how important OUR voices are and being a resource of CORRECT information for them is priceless!”

The DC Project is also a true bi-partisan effort. As Tier1 Gun Store owner, Katy Brown, from Washington State said, “Among our ladies are Liberal Democrats, Conservative Republicans and everything in between.” Everyone checked their pre-conceived notions at the door and came together as supporters of the Constitution. Not only was it eye opening to stand side by side with women from a variety of political persuasion, all focused on the same goal, but we also met with legislators on both sides of the aisle and the issue.