Vera Koo is the first and only woman in the history of the Bianchi Cup to win eight of these National Top Woman Titles, plus two additional World Titles.

She was also the first woman to place in the overall top 20 shooters at the Cup. At the moment, Vera is competing in the regular Women’s category, as well as the Senior category, in which she competes against only male shooters. Now in her late-60s, Vera has lived around the world, raised three grown children, and induldged four beautiful grandchildren. She is currently authoring a book sharing her experiences as an elite athlete, a Chinese-American immigrant, and a loving wife and mother. 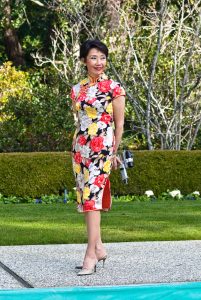 Vera was born in China, a first generation immigrant to United States when she was twelve years old. She has a bachelor’s degree in Art, and was working in the Real Estate Investment Management business until her retirement. She is a mother of three grown children and a grandmother of four granddaughters. Vera enjoyed doing many outdoors sports with her husband of 47 years. She is an expert downhill skier, enjoys sports such as water skiing, equestrian, windsurfing, camping and back packing. She loves gardening and sewing, and travel, a big time movie buff. And of course she loves Bianchi Cup !

Vera got involved in competitive shooting by accident. She was extremely afraid of handguns and entered a handgun safety class at a community college. Then at the age of 47, she enters into the arena of competitive shooting. She  has shot in IPSC, Steel Challenge, American Handgunner’s man on man shoot-off, Masters, bullseye, etc…She is currently still competing in the Action Pistol (Bianchi Cup) Championship even though she is turning 70 years old by this Christmas. She plans to compete in the NRA World Action Pistol Championship in New Zealand this November.

Vera is also a columnist at WON (Women’s Outdoor News) for the past 2 years, writing from her unique perspective on the shooting sports.

Places you can find Vera Koo