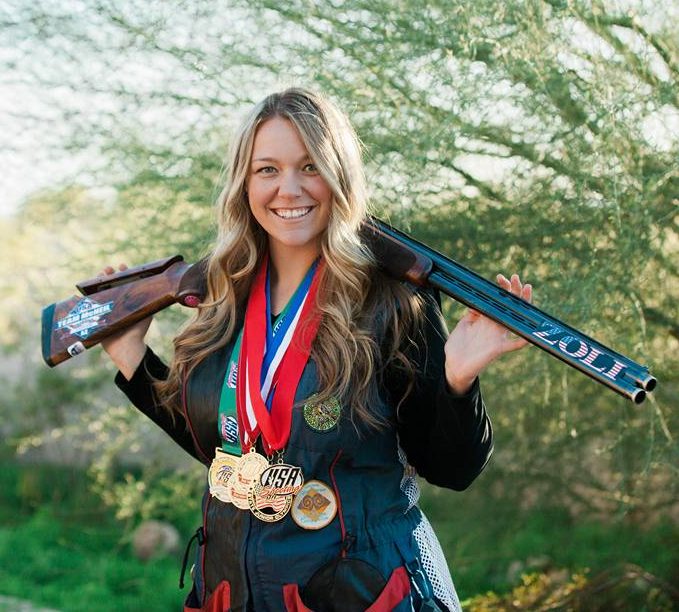 Tayler has competed on the National platform for the past 4 years and has earned recognition by AZ State Governor, Doug Ducey as an outstanding Arizona athlete.

Tayler began shooting in March of 2011 by participating in a beginners summer league at Ben Avery Clay Target Center in Phoenix, Arizona.   She began by shooting Sporting Clays then onto Skeet and Trap.  Before joining the women’s league, Tayler had only been hunting with her father and family.  Soon after starting with shooting sports, she quickly found her passion.

After seeking the advice from her Dad and fellow competitors, she felt the need to challenge herself to shoot International Trap.  This is where she began to follow her dream of becoming an Olympic athlete.  She became a member of the USA Shooting organization and started competing with Olympic shooters from all around the nation. She since has competed in the Junior Olympics and USAS National competitions.

Currently Tayler is attending college at Glendale Community College working towards a Masters degree in Mechanical Engineering.  Tayler enjoys shooting and the outdoors and spending time with her family.  She is often found at the bunker trap field but when she’s not training she always finds time to talk to other young people about her Olympic path.  Tayler speaks at elementary schools and shares her passion of gun safety and youth shooting sports with the students. She is passionate about making others aware that female shooters can make a difference.

Places you can find Tayler McNeil