Sidney Powell—author of the best-selling non-fiction book LICENSED TO LIE: Exposing Corruption in the Department of Justice, and nationally known former federal prosecutor, lead counsel in more than 500 federal appeals.

Sidney Powell served in the Department of Justice for ten years in Texas and Virginia and has devoted her private practice to federal appeals for the past twenty years. She was the youngest Assistant United States Attorney in the country when she was appointed. Later, she became Chief of the Appellate Section for the Western and Northern Districts of Texas. She is a Fellow of the American Academy of Appellate Lawyers and served as its President. Recognized by her peers as a “Super Lawyer” and named as one of the “Best Lawyers in America” for years, she has been lead counsel in more than 500 appeals in the United States Court of Appeals for the Fifth Circuit, resulting in more than 180 published opinions.  She was President of the Bar Association of the Fifth Federal Circuit, and her briefs have long been featured as samples for practitioners.  She also writes for the New York Observer, the NRO, and Fox News.  Her news-breaking articles have appeared frequently on Drudge, Breitbart, Investors Business Daily, NewsMax, and in countless other publications.  She has appeared frequently on Book TV for the CATO Institute, NewsMax TV, Fox and countless radio shows. 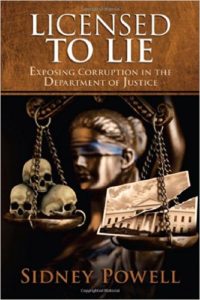 Think you know the truth about the prosecutions of Arthur Andersen LLP, Enron, and the Merrill Lynch executives in the Enron Barge case?  Think again.

This is the inside story of the most high-profile prosecutions of the last decade, and it’s a 5-star great mystery read on Amazon.  A gruesome suicide, a likely murder, a tragic plane crash, wrongful imprisonment, and gripping courtroom scenes draw readers into this compelling story, giving them a frightening perspective on justice and who should be accountable when evidence is withheld. Licensed to Lie reveals the strong-arm, illegal, and unethical tactics used by headline-grabbing federal prosecutors in their narcissistic pursuit of power to the highest halls of our government.  It’s terrifying–because it’s true.  Just ask United States Senator Orrin Hatch, Ninth Circuit Judge Alex Kozinski, or Fox News John Stossel–to name a few. It should be required reading for every law student, lawyer, judge, politician, and concerned taxpayer.  Sidney Powell has written a book like no other lawyer has ever dared–and she’s pulled back the royal blue curtain of the Department of Justice.  Brace yourself for this read! 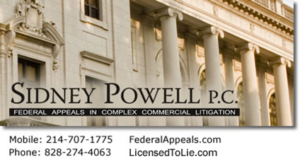 For information on bulk orders of books, or, to schedule Sidney Powell to speak to your group, please contact:

Places you can find Sidney Powell