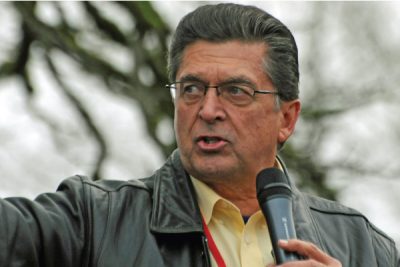 Sheriff Richard Mack is the Founder and President of the Constitutional Sheriffs and Peace Officers Association (CSPOA) and organized The Freedom Coalition.

Sheriff Mack is best known for challenging the Brady Bill, a gun control scheme requiring
local law enforcement to perform background checks on prospective gun purchasers. Since that landmark ruling Mack has written six books and appeared at over 120 Tea Party rallies nationwide. He has also led a Supreme Court victory for state sovereignty and The Second Amendment.
The Constitutional Sheriffs and Peace Officers Association (CSPOA) exists to educate citizens and elected officials, from sheriffs to commissioners to judges on their Constitutional rights and responsibilities. With this knowledge we become empowered to walk in our in-a-LEIN-able rights that have been endowed upon us by our creator. The CSPOA movement is apolitical as a constitutional Sheriff is not defined as Democrat, Republican or Libertarian. A constitutional Sheriff, in reference to their OATH, their citizenry, and the constitution is dedicated to UPHOLD – DEFEND – PROTECT – SERVE.
The Freedom Coalition‘s mission is to help free America’s political prisoners and clean up bureaucratic corruption.
Honors and Awards:
• Samuel Adams Leadership Award (Local Sovereignty Coalition)
• Elected Official of the Year 1994 (NM/AZ Coalition of Counties)
• “Cicero” Award (Firearms Industry of America)
• Inducted into the NRA Hall of Fame
• Is the only person in American history to receive the highest honors for public officials
from The Second Amendment Foundation, Gun Owners of America, and the NRA.
• The Second Amendment March in Washington D C of 2010 gave him the “American
Patriot” award