Michael “Rod” Rodriguez is a retired Special Forces Green Beret Sniper and Medic, deployed 9 times over 21 years. A proponent of Art Therapy, after getting injured during his last deployment, Rod turned to blacksmithing to aid in his recovery. He is the Director of the Board for the Global War On Terror Memorial Foundation, sits on President Bush’s Military Service Initiative Advisory Council, and is the Executive Ambassador for the Green Beret Foundation. 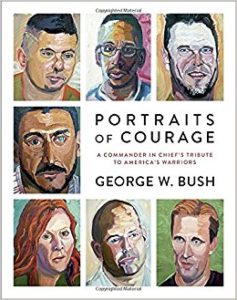 Rod is also one of only a handful of people who has had their portrait painted by our 43rd President of the United States, George W Bush. Rod’s likeness is hanging in the George W Bush Presidential Library & Museum, and also graces the cover of the book titled, Portraits of Courage: A Commander in Chief’s Tribute to America’s Warriors.

Following his last deployment and injuries sustained, he was assigned as a Sniper Instructor at Ft Bragg NC where he continued to serve until his multiple TBI’s and PTS forced him to be medically retired after 21 years of service.

His wife retired in 2017 after 21 years of service in the Army, and has three sons, the eldest of which serves in the 82nd Airborne Division and is at the writing of this, in November of 2017, is currently deployed to Afghanistan marking the 16th deployment for the Rodriguez Family.