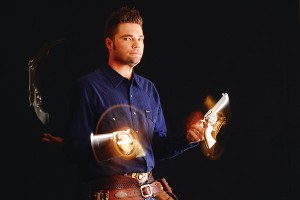 Joey Dillon is a multiple World Champion at the art of trick gun handling and is Hollywood’s go to guy for training actors to look good with a gun on many recent films. He has also made appearances in front of the camera as an expert discussing the history of the firearms he uses and the men who used them. He has been seen on the History, Discovery, Biography, and Military Channels as well as Spike T.V. and a few others. When not working in Hollywood Joey travels the globe with his stage act consisting of comedy, history, music, and tons of trick gun handling. A unique variety of God given talents rolled into one performance.