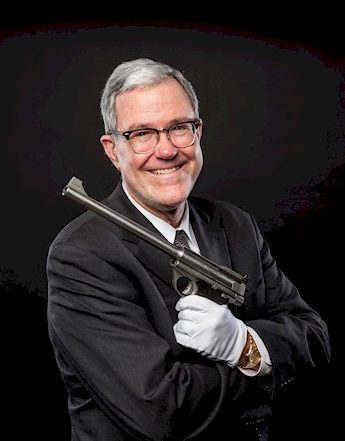 Jim Supica recently retired as Director of the NRA Museums Division, where he co-authored the just-released Illustrated History of Firearms, 2nd Edition, with NRA Museum Senior Curators Phil Schreier and Doug Wicklund.  The 1st Edition of this book was the best-selling firearms book of all time, and the new 2nd Edition is greatly expanded.

Jim has co-authored eight books and written numerous articles on firearms history and gun collecting.  He is the new Editor of Standard Catalog of Firearms.  On television, he has co-hosted six seasons of NRA Gun Gurus and NRA Guns & Gold, and regularly appears on other national firearms-related shows such as Outdoor Channel’s Gun Stories.

Jim is an antique firearms collector and consultant.  He’s a former member of the NRA Board of Directors.  He holds Juris Doctorate and Bachelor’s degrees from the University of Kansas.  He and Eve have moved from the DC area back to their home in Olathe Kansas.

Since “retirement” Jim has a few irons on the fire:

Places you can find Jim Supica