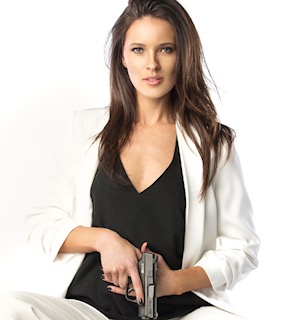 Amy Robbins is the Founder and CEO of Alexo Athletica and Co-Host of Not Your Average Gun Girls Podcast.

While hosting NRATV’s NOIR and GunTV, our founder and CEO Amy Robbins’ passion for firearms grew along with her desire to see women everywhere live a confident, self-reliant lifestyle. An avid runner, Amy wanted the ability to train for a marathon wherever she wanted to, even in the wee hours, without fearing for her safety, so she obtained her License to Carry. However, she quickly realized that the license to carry did her little good when she didn’t have comfortable, functional (much less great-looking) apparel which would allow her to exercise while also exercising her right to carry and still look and feel great.

Amy created Alexo Athletica because no product existed on the market that would meet her need to feel fashionable while carrying in active wear. She saw a white space in the market and jumped on the opportunity to not only provide fashionable, functional carry wear but create a movement of empowered, independent women who could #carrywithconfidence.

Places you can find Amy Robbins