Divided and Down, But Not Out, by Cheryl Todd

Transcript of a speech delivered by Cheryl Todd to the Fountain Hills Republican Club, Arizona 10.15.16

Divided and Down, But Not Out

We have division in our house, but I bring you good news. 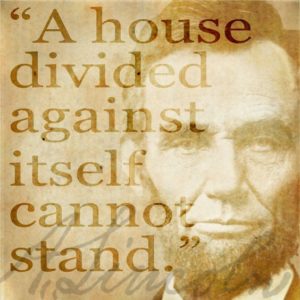 We have division in our house. And that sounds bad…right? A house divided cannot stand.  President Abraham Lincoln himself said that, and was quoting the Bible (Matthew 12:25). But, that is only true if the divided parts turn on each other, and that is only true if division is a permanent condition, rather than a temporary state. And I have argued many times, and still argue today, that division and dissension can be good. This nation was built and our Constitution was forged out of the same passions, the same anger, and the same division that we feel today. The danger lies in the bobble-head-like, lockstep agreement with whatever the all-knowing, all-powerful people “at the top” hand down to us. Division indicates we haven’t yet swallowed the Kool-Aid. And that is good.

In our GOP Presidential Nominee we have an imperfect person, someone possibly too “human” to lift up in the God-like fashion that we have become accustomed to doing. The Hillary camp, that is almost visually salivating in their lust for power, and seething with indignant haughtiness at the idea that it is “her turn” to sit in the President’s seat…is doing everything they can to make you and I feel ashamed and embarrassed to vote for our candidate, Donald Trump.  They know we aren’t about to vote for her, Hillary Clinton, although, as odd as it may sound, I have heard people tell me that some of us might out of sense of dedication that “we vote” – that’s what we do – when we care about this nation and the direction it is headed. We vote, we are voters, and we can either support someone we like with our vote or we can deny our vote to someone we don’t like by either staying home or voting opposite or third party. I know that this room is filled with people who value their vote too much to let it help Hillary be elected as our next President. And the people in this room understand the ramifications of a Clinton Presidency as it relates to so many things, including the Supreme Court, and our Second Amendment Rights, but we may not be able to articulate that to our friends.  I hope my words are ones that will help you to convey to your friends and family who may still be on the fence.

Let’s go back to that all too “human” part. Maybe we need someone who can’t be adored sitting in the oval office. We’ve just experienced 8 years of a President that people have fawned and swooned over…maybe now it’s time for one who will get to the business of running our country, and building up our nation from the inside out, and understands what it takes to hire good people fit for service and fire those who are merely placeholders cashing a tax-funded paycheck that you and I pay.  Presidents should not be God-like…George Washington warned us of our tendency to want to hero-worship the person in the Presidency, and to want to build him or her a throne, rather than an office chair.  We need an office-chair President…who isn’t using his OWN pen and phone (President Obama), but who understands that the pen and phone belong to us – WE the People – and is to be used – not to book the next tee time at the golf course, but to fulfill the promise to “Make America Great Again”.

And let me also suggest that all of Trump’s dirty laundry that the Clinton camp keep throwing in our faces is nothing more than a cheap tactic to shame…not Trump…but US! You and I…who she has already segregated into Baskets. I get a funny visual when I hear her say “baskets of deplorable” – first of all – how is that even a phrase? I have never heard anything like it before, but she uses it like it is an age old idiom or adage. Anyway…I digress…the endless stream of “mean things Trump said” is a trick used to make us too ashamed to cast our vote for our candidate. And, too ashamed to proudly proclaim to our friends and neighbors that we are supporting Trump. By doing so, under this shame tactic, we will have taken on the Scarlet Letter D, for Deplorable, and all those sexist and xenophobic labels that Hillary slapped on our foreheads. We will instantly be labeled as cretins, knuckle-draggers, and hate-mongers. I am a business person, and word of mouth advertising is the most powerful advertising there is…when Joe tells Jill that AZFirearms is the best gun shop, it is priceless. If Joe likes AZFirearms, but for some reason is embarrassed to say he does, that too is price – LESS. All of our service and dedication means nothing if others won’t even recommend us to their friends. So, with Trump we find ourselves qualifying every sentence with “well, he wasn’t my first pick, but he’s who we’ve got”. I’ve said it…but I am done saying that.  For every “story” of something Trump said or did that can be painted and half-told to sound shocking and repulsive, there are 100 stories of his goodness, his generosity, and his ability to motivate, build and unite.

I am so proud of our AZ GOP Chairman, Robert Graham (and I love how he calls us the Great Opportunity Party), for taking the position of supporting our Republican Nominee. That nominee has done something that no other person, in the history of the United States has done. This is a Rocky story if I’ve ever heard one! 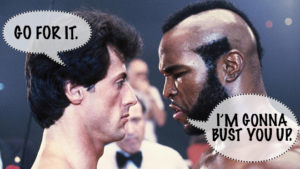 What is that line in Rocky 3, when Stallone is fighting Mr. T (Rocky vs Clubber Lang) – remember when it looks like Rocky has been beaten – and he is completely out of energy – and he’s down for the count, you’re just sure of it – it’s the final fight scene and everyone is yelling at Rocky that he is doing it all wrong, allowing Clubber to land too many blows – and saying Clubber is too strong – the blows are coming to fast, from every side, and they are hitting too hard.  What does Rocky say? He says, “You ain’t so bad, you ain’t nothin’. C’mon, champ, hit me in the face! My mother hits harder than that!”

How many times have we seen our candidate be marginalized and written off as “done”? And yet the crowd still shows up and cheers him on and he defies every pundit who has determined there is no coming back from the Clinton Machine’s fierce and low blows.

Just look at the accomplishments:

#1) He is a private citizen who isn’t tainted by donations – and in fact was self-funded the first major part of his campaign. Cue the song “You Don’t Own Me”.

#2) He debated a stage full of professional politicians, who are trained at their craft – who are more polished and have handlers with long political resumes…and our Rocky stayed standing time after time, and was ultimately the last man standing.

#3) After handily beating each of these 16, some odd candidates for the GOP nomination, he rallied many of them to immediately begin working to help him with his campaign. That is leadership. To turn a foe into a friend…and more than that, they have become enthusiastic supporters and each of them someone who will put THEIR reputation behind Trump. 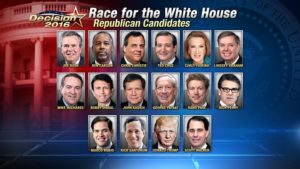 I have two more comparisons to Rocky and then I will get over it already. Bringing people around like that is kind of like when Apollo Creed (Rocky’s former opponent) came around to help as Rocky’s trainer and beat Clubber (Clinton) Lang.

And who are we in the Rocky scenario? We aren’t just the cheering crowd. We are Adrianne – we are the ONE that fuels Rocky’s fire to keep fighting. Remember, “I did it for you Adrianne!”…that is what Trump is saying when he says he will “Make America Great Again”…he is doing it for you and for me and for our future generations. So, don’t let the Clinton Machine cause you to feel ashamed of supporting our GOP Candidate, and quiet you down with their PC Police, and embarrass you away from voting for Donald Trump.

Ok…now I need to go home and binge re-watch all of the Rocky movies again! So, I promised you that I had good news.  And I do. I want to share with you three organizations who are working to protect and preserve our Constitution for this and future generations.

The D.C. Project is a nonpartisan initiative to encourage women to establish relationships with their legislators, and reveal the faces and stories of firearms owners and 2nd Amendment supporters.

Highlight the diversity of gun owners and the rising female demographic.

Students for Self-Defense is the only national organization with a comprehensive approach to student safety issues and a commitment to advocating for students’ right to self-defense enshrined in the United States Constitution. Students for Self-Defense is a nonprofit organization dedicated to protecting students’ rights to defend themselves from bodily harm, advocating for common-sense safety policies at America’s colleges and universities, and connecting students with resources that will help them stay safer on campus.

Turning Point USA is a 501(c)3 non-profit organization founded on June 5, 2012 by Charlie Kirk. The organization’s mission is to identify, educate, train, and organize students to promote Constitutional principles, personal responsibility, free markets, and limited government. With a presence on over 1,000 college campuses and high schools across the country, Turning Point USA is the largest and fastest growing youth organization in America!

How ever this election turns out, these organizations are already in place, planting seeds, that will become little sprouts that will grow to be mighty oak trees. These organizations will encourage others to reject the labeling the Left is attempting to brand us with, so that still more groups will develop designed to help educate, empower, and motivate ordinary citizens – WE the People – to take action, to speak up, to speak out and to help shape the future of America. 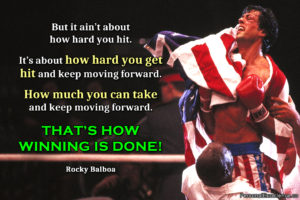 Ok…one more Rocky quote.  It is a quote we use in each of our shows on Gun Freedom Radio. My husband, Dan, does a segment that might “technically” be called a rant about the craziness we live out with the Progressive Liberal Rights Restrictors constantly chomping away at our freedoms…but we have titled it “Dan’s Calm-mentary” – a play on the word Commentary – and the opener is from the later Rocky movie called “Rocky Balboa”.  It goes like this:

“Let me tell you something you already know. The world ain’t all sunshine and rainbows. It’s a very mean and nasty place and I don’t care how tough you are it will beat you to your knees and keep you there permanently if you let it. You, me, or nobody is gonna hit as hard as life. But it ain’t about how hard ya hit. It’s about how hard you can get hit and keep moving forward. How much you can take and keep moving forward. That’s how winning is done!”
― Sylvester Stallone, Rocky Balboa 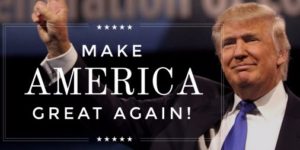