Functional Fixedness and the Easily Offended, by Cheryl Todd

“Have we come to place in history where the common man so lacks discernment and wisdom that we must see inanimate objects as having only one possible use?  In the field of Psychology that would be called “Functional Fixedness”…for example, can a screwdriver ONLY be used to turn a screw?  Could it also be used to pry open a can of paint?  Or could it be used to dig a small hole to plant a seed in the ground, or even as a deadly, knife-like weapon?  Intelligent, logical, and mature-minded people can consider all such possibilities.

It is as if the entire nation is stuck in what renowned Developmental Psychologist Jean Piaget would have termed the “Preoperational Stage” of Development.  The preoperational stage ranges from about ages 2 to 7.  At this age, a child cannot use logic.  They can’t transform, combine or separate ideas.  They focus on only one aspect of a situation at a time.  The media talks to us as if we’re children.

Maybe it isn’t their fault.  Perhaps they were overindulged by parents, educational institutions, and the like.  This childish perspective on the world certainly annoys those of us who are trying to have adult conversations.  I cannot begin to offer any solutions to the never-ending cries of “gimme, gimme, gimme” from those who refuse to take responsibility for their own emotional reactions to the world around them.  Perhaps we can explain their distorted perspective.  They suffer from a distinct and measurable level of emotional under-development.  At least this realization lets us have more patience with (and give less credibility to the emotional screaming of) the adult-age, 2-year-old-minded people in our lives.”  READ MORE HERE 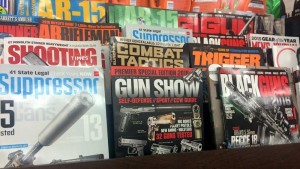 Some look at this shelf of magazines as glorifying violence, others are able to see tools that are used for self-defense, hunting and the shooting sports.